Curious to learn more about entrepreneurship and innovation? Check out this list which is based on recommendations from some of companies and entrepreneurs at Innovation Dock. 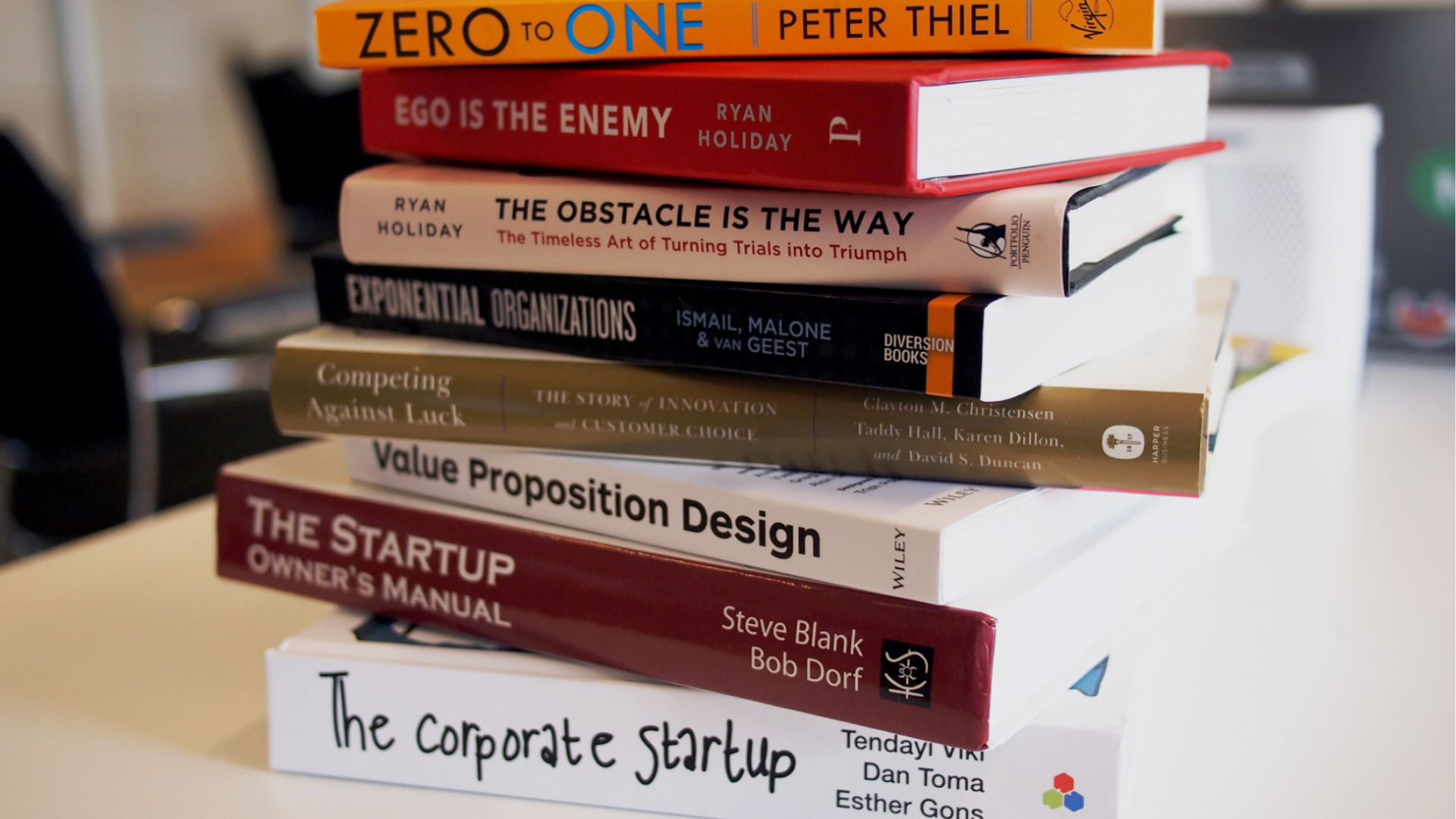 ‍1. The Power of Habit by Charles Duhigg

In The Power of Habit, award-winning business reporter Charles Duhigg takes us to the thrilling edge of scientific discoveries that explain why habits exist and how they can be changed. Along the way we learn why some people and companies struggle to change, despite years of trying, while others seem to remake themselves overnight. We visit laboratories where neuroscientists explore how habits work and where, exactly, they reside in our brains.  At its core, The Power of Habit contains an exhilarating argument: The key to exercising regularly, losing weight, being more productive, and achieving success is understanding how habits work. By harnessing this new science, we can transform our businesses, our communities, and our lives.

Around the globe, people are facing the same problem - that we are born as individuals but are forced to conform to the rules of society if we want to succeed. To see our uniqueness expressed in our achievements, we must first learn the rules - and then how to change them completely. Charles Darwin began as an underachieving schoolboy, Leonardo da Vinci as an illegitimate outcast. The secret of their eventual greatness lies in a 'rigorous apprenticeship': by paying close and careful attention, they learnt to master the 'hidden codes' which determine ultimate success or failure. Then, they rewrote the rules as a reflection of their own individuality, blasting previous patterns of achievement open from within. Told through Robert Greene's signature blend of historical anecdote and psychological insight and drawing on interviews with world leaders, Mastery builds on the strategies outlined in The 48 Laws of Power to provide a practical guide to greatness - and how to start living by your own rules.

In The Leadership PIN Code, Dr Nashater Deu Solheim shares a proven framework for creating the impact and influence you need in your daily work. You’ll learn how to use three simple keys to get what you need from every interaction—while also maintaining positive relationships. Nashater’s ebooknow made: #1 Amazon bestseller in Project Management, #1 Amazon bestseller in Business Ethics and it made the top 40 “business leadership” books overall.

4. The Lean Startup by Eric Ries

In The Lean Startup the successful serial entrepreneur Eric Ries throws traditional thinking out of the window, and presents his radically new methodology for building a successful business. Most startups, says Ries, fail - but they fail for preventable reasons. 'Lean thinking' is the key to success, and represents the next paradigm shift in business management. Startups generally fail not because of missed deadlines, faulty products or blown budgets, but because entrepreneurs are too focused on their vision, on their great new idea, and don't know what it is that their customers really want. The solution, according to Ries, is 'lean thinking' and 'validated learning'.

5. Start With Why by Simen Sinek

Why are some people and organizations more inventive, pioneering and successful than others? And why are they able to repeat their success again and again?

Because in business it doesn't matter what you do, it matters why you do it.

This book is for anyone who wants to inspire others, or to be inspired.

Based on the most-watched TED Talk of all time.

24 Steps to Success! Disciplined Entrepreneurship will change the way you think about starting a company. Many believe that entrepreneurship cannot be taught, but great entrepreneurs aren t born with something special they simply make great products. This book will show you how to create a successful startup through developing an innovative product. It breaks down the necessary processes into an integrated, comprehensive, and proven 24-step framework that any industrious person can learn and apply. You will learn: How to use innovation to stand out in the crowd it s not just about technology Whether you re a first-time or repeat entrepreneur, Disciplined Entrepreneurship gives you the tools you need to improve your odds of making a product people want.

One of the most valuable skills in our economy is becoming increasingly rare. If you master this skill, you'll achieve extraordinary results. Deep Work is an indispensable guide to anyone seeking focused success in a distracted world.
'Deep work' is the ability to focus without distraction on a cognitively demanding task. Coined by author and professor Cal Newport on his popular blog Study Hacks, deep work will make you better at what you do, let you achieve more in less time and provide the sense of true fulfilment that comes from the mastery of a skill. In short, deep work is like a superpower in our increasingly competitive economy. Put simply: developing and cultivating a deep work practice is one of the best decisions you can make in an increasingly distracted world and this book will point the way.

is a book for managers who want to lead their employees to new heights, a manual for anyone who strives for originality, and the first-ever, all-access trip into the nerve center of Pixar Animation Studios-into the story meetings, the postmortems, and the `Braintrust' sessions where art is born.

9. Cant Hurt Me By David Goggins

For David Goggins, childhood was a nightmare — poverty, prejudice, and physical abuse colored his days and haunted his nights. But through self-discipline, mental toughness, and hard work, Goggins transformed himself from a depressed, overweight young man with no future into a U.S. Armed Forces icon and one of the world's top endurance athletes. The only man in history to complete elite training as a Navy SEAL, Army Ranger, and Air Force Tactical Air Controller, he went on to set records in numerous endurance events, inspiring Outside magazine to name him “The Fittest (Real) Man in America.” In Can't Hurt Me, he shares his astonishing life story and reveals that most of us tap into only 40% of our capabilities. Goggins calls this The 40% Rule, and his story illuminates a path that anyone can follow to push past pain, demolish fear, and reach their full potential.

Shoe Dog by Phil Knight 'A refreshingly honest reminder of what the path to business success really looks like ...It's an amazing tale' Bill Gates In 1962, fresh out of business school, Phil Knight borrowed $50 from his father and created a company with a simple mission: import high-quality, low-cost athletic shoes from Japan. Selling the shoes from the boot of his Plymouth, Knight grossed $8000 in his first year. Today, Nike's annual sales top $30 billion. In an age of start-ups, Nike is the ne plus ultra of all start-ups, and the swoosh has become a revolutionary, globe-spanning icon, one of the most ubiquitous and recognisable symbols in the world today. But Knight, the man behind the swoosh, has always remained a mystery. Now, for the first time, he tells his story. Candid, humble, wry and gutsy, he begins with his crossroads moment when at 24 he decided to start his own business. He details the many risks and daunting setbacks that stood between him and his dream - along with his early triumphs. Above all, he recalls how his first band of partners and employees soon became a tight-knit band of brothers.

Thanks! You will hear from us soon!
Oops! Something went wrong while submitting the form.